Students interested in conducting undergraduate and graduate thesis research for Spring-Fall semesters 2023 feel free to contact me at: santiagoalarcon@usf.edu

The project aims to understand the succession and assembly process of avian malaria communities using long term research at the USF Forest Preserve, and across an urbanization gradient in the Tampa area.

For more information on the forest preserve visit: https://www.usf.edu/arts-sciences/departments/ib/research/forest-preserve.aspx

The main vertebrate group to study is birds and the parasites are the group of malarias and related haemosporidians (vector-borne blood parasites).

Students interested in conducting graduate work (M.Sc. and Ph.D.) please visit our graduate program web page at https://www.usf.edu/arts-sciences/departments/ib/graduate/index.aspx, so you can get all the information and see financial options (e.g., TAs, Fellowships).

Posted by Diego Santiago-Alarcon at 7:54 PM No comments: 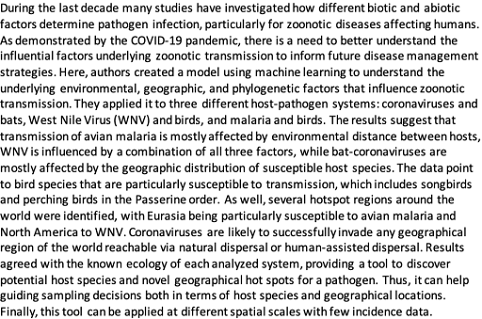 Posted by Diego Santiago-Alarcon at 7:50 PM No comments:

Long-term, inter-annual and seasonal variation in temperature and precipitation influence the distribution and prevalence of intraerythrocytic haemosporidian parasites. We characterized the climatic niche behind the prevalence of the three main haemosporidian genera (Haemoproteus, Plasmodium and Leucocytozoon) in central-eastern Mexico, to understand their main climate drivers. Then, we projected the influence of climate change over prevalence distribution in the region. Using the MaxEnt modelling algorithm, we assessed the relative contribution of bioclimatic predictor variables to identify those most influential to haemosporidian prevalence in different avian communities within the region. Two contrasting climate change scenarios for 2070 were used to create distribution models to explain spatial turnover in prevalence caused by climate change. We assigned our study sites into polygonal operational climatic units (OCUs) and used the general haemosporidian prevalence for each OCU to indirectly measure environmental suitability for these parasites. A high statistical association between global prevalence and the bioclimatic variables ‘mean diurnal temperature range’ and ‘annual temperature range’ was found. Climate change projections for 2070 showed a significant modification of the current distribution of suitable climate areas for haemosporidians in the study region. 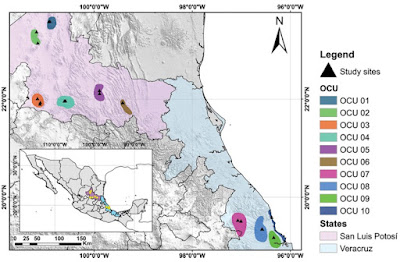 Posted by Diego Santiago-Alarcon at 10:13 AM No comments:

How Quantum Mechanics Can Explain Evolutionary Adaptations and Novelty?

mechanisms, such as enzyme reaction rates via tunnelling and photosynthesis

energy efficiency via coherent superposition of states. However, less

evolution. In this paper, we used transcription factor networks with two

at finding novel phenotypes between CRW and QW. In the network with

QW are as efficient as CRW at finding new phenotypes. In the case of the

network with four phenotypes, the QW had a higher probability of mutating

to a novel phenotype than the CRW, regardless of the number of mutational

steps (i.e. 1, 2 or 3) away from the new phenotype. Before quantum decoherence,

Thus, our results warrant further exploration of the QW under more 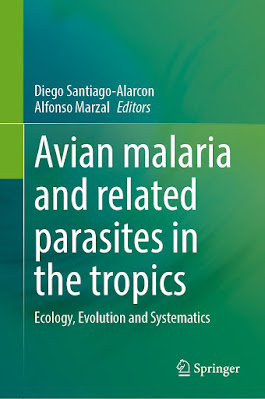 The Tropics are home to the greatest biodiversity in the world, but tropical species are at risk due to anthropogenic activities, mainly land use change, habitat loss, invasive species, and pathogens. Over the past 20 years, the avian malaria and related parasites (Order: Haemosporida) systems have received increased attention in the tropical regions from a diverse array of research perspectives. However, to date no attempts have been made to synthesize the available information and to propose new lines of research. This book provides such a synthesis by not only focusing on the antagonistic interactions, but also by providing conceptual chapters on topics going from avian haemosporidians life cycles and study techniques, to chapters addressing current concepts on ecology and evolution. For example, a chapter synthesizing basic biogeography and ecological niche model concepts is presented, followed by one on the island biogeography of avian haemosporidians. Accordingly, researchers and professionals interested in these antagonistic interaction systems will find both an overview of the field with special emphasis on the tropics, and access to the necessary conceptual framework for various topics in ecology, evolution and systematics. Given its conceptual perspective, the book will appeal not only to readers interested in avian haemosporidians, but also to those more generally interested in the ecology, evolution and systematics of host-parasite interactions.
You can buy it at: https://www.springer.com/gp/book/9783030516321
Posted by Diego Santiago-Alarcon at 5:37 PM No comments:

Transformation of natural environments for livestock, agriculture and human settlements modifies the diversity of organisms, usually decreasing in highly disturbed land uses. Like their hosts, parasites have to adapt to novel human impacted landscapes, in which the abiotic and biotic conditions are radically different from those of conserved natural environments. We evaluated the diversity (alpha and beta taxonomic and phylogenetic diversity) of haemosporidians (mtDNA cyt b lineages) in the common chlorospingus (Chlorospingus flavopectus) at five land use types. We further analyzed the response of prevalence, parasitaemia and parasite aggregation to and use types and seasonality. Parasite lineage richness (i.e., haplotypes) and abundance (no. infected hosts) decreased with disturbance. Parasite assemblages were commonly dominated by either one of two lineages, one dominant in the urban greenspace (pBAEBIC02) and the other dominant in well-preserved mountain cloud forest (hCHLFLA01). Beta diversity was mainly explained by lineage turnover. Phylo beta diversity was low (i.e., lineages are closely related). Overall prevalence increased in wet season that coincides with host's breeding season. Haemoproteus and Plasmodium prevalence presented the opposite response to urbanization (negative and positive, respectively). Parasitaemia presented similar values across land uses for both genera and seasons, while Plasmodium aggregation decreased with urbanization. Thus, some parasite lineages (pBAEBIC02) will benefit from the urbanization process, while others will entirely disappear from cities (hCHLFLA01).

Hernández-Lara C, Carbó-Ramírez P, Santiago-Alarcon D. 2020. Effects of land use change (rural-urban) on the diversity and epizootiological parameters of avian Haemosporida in a widespread neotropical bird. Acta Tropica209: 105542 https://doi.org/10.1016/j.actatropica.2020.105542
To download for free until August 01, 2020: https://authors.elsevier.com/a/1bDd4,2Uvj2LY

Posted by Diego Santiago-Alarcon at 1:43 PM No comments:

Biological invasions are the second most important cause of species extinction. Aided by processes such as transportation and urbanization, exotic species can establish and spread to new locations, causing changes in the function and structure of ecosystems. The House Sparrow is a widespread and highly abundant landbird associated to human presence. Previous studies performed in urban landscapes have suggested that this species could be acting, in synergy with urbanization, as a potential threat to native urban avian assemblages. In this study we assessed the relationship between House Sparrow density and native bird species richness in a region where the sparrows are scarce and sparsely distributed. We surveyed bird assemblages in and around four small-sized human settlements, considering three conditions in relation to House Sparrow presence: urban invaded,
urban non-invaded, and non-urban non-invaded. To assess the potential detrimental role of House Sparrows on native bird species richness, we measured, additionally to sparrow densities, 20 predictor variables that describe vegetation structure and complexity, as well as urban infrastructure and human activities across four seasons of 1 year. Our results show that maximum shrub height was positively related to bird species richness, built cover was negatively associated with it, and House Sparrow invaded sites were related to a significant decrease of bird species richness, with increasing richness loss when more sparrows were present. Thus, we here provide evidence that urban areas can act in synergy with the presence of House Sparrows (even in low densities) in the urban-related species richness decline pattern. 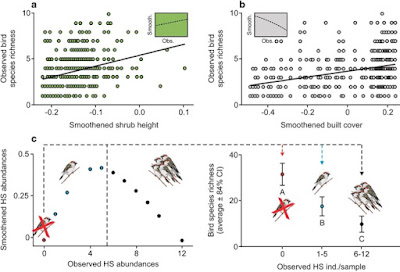 Posted by Diego Santiago-Alarcon at 6:17 PM No comments: